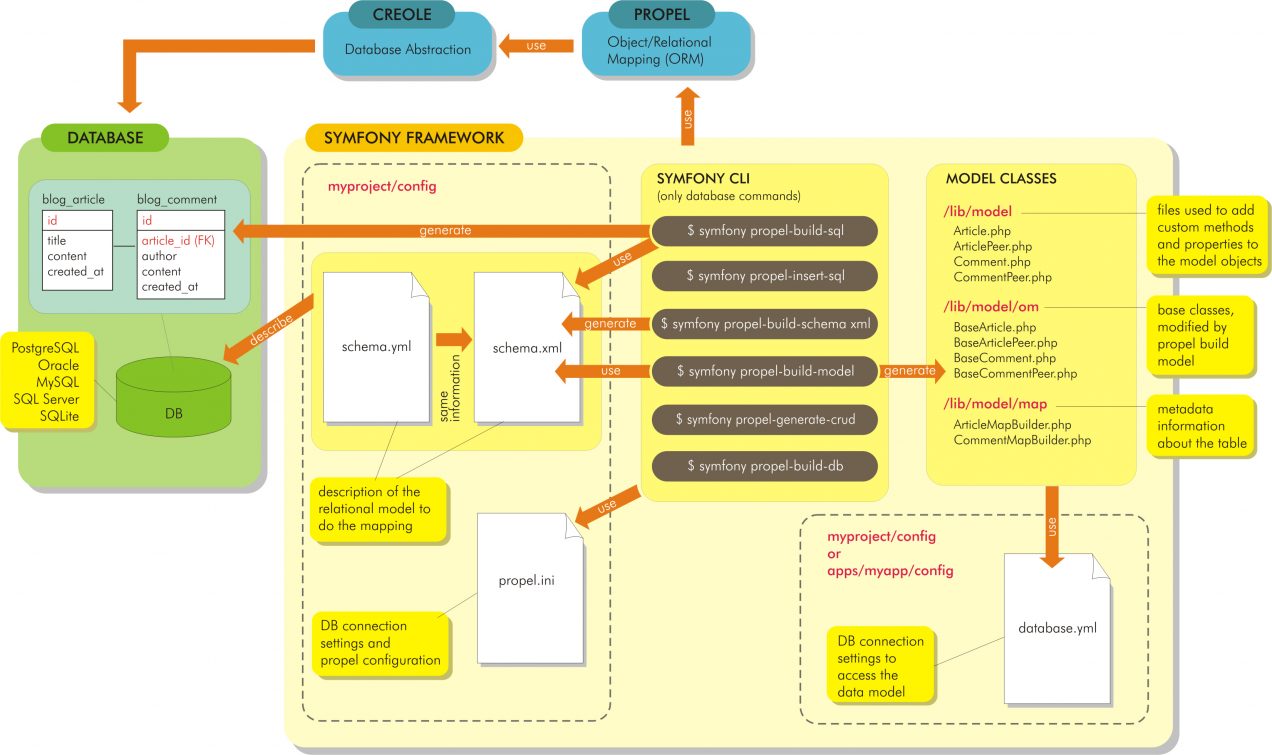 One of the topics of seemingly perennial discussion among programmers is whether object-relational mapping (often abbreviated to ORM) is evil or not. Opinions seem to run the gamut from “I use and love it” to “I tried it once and never will again.” And you often encounter at least a few “what are you talking about?”s.

What is an Object-Relation Mapper (ORM)?

For the “what are you talking about?”s, a little explanation.

That’s what people use object-relational mappers to do.

Among ORMs, there are a two very common philosophies or patterns: Active Record and Data Mapper. These two have advantages and disadvantages, we’ll explore them both in this article. But since it ended up being a “benefits” and “drawback” articles, let’s first explore what’s good about ORMs in general.

Major benefits of using an ORM

Downsides of an Object-Relational Mapping System

If most programmers know about active record, it’s because they’ve used it in a web framework. Ruby on Rails is built around Active Record. So are most PHP frameworks like Laravel, Yii, CodeIgniter, and CakePHP.

The essential concept of the active record pattern is that your database records are “active” in your system. Practically what that means is that if you’re touching five BlogPost objects, and you save them into your database, they’ll end up as five rows in your blog_posts database table. What’s more, if your BlogPost object has postContent and publishedDate properties, that allows us to assume that those are columns in the aforementioned blog_posts table.

Some Example Code from an Active Record ORM in PHP

These are using a Laravel model. It’s basic structure would look a bit like this:

You’ll notice above that the object has no clearly defined properties. That’s no a selective omission I’ve made, but rather the most important choice of active record. They don’t recorded on the object because they are in the database. So you end up using something like the array shown above to know that the object (likely) has those properties.

Eloquent relationships are how you define which objects are related to others. Here’s a basic explanatory bit of code:

The Bad: Active Record Has Problems

These are from Doctrine (Symfony) code. Here’s a basic model:

And how you define properties, which unlike Eloquent (active record) you must explicitly define:

Because the Symfony/Doctine convention stresses making properties private or protected, it’s also important to make methods of access. Getters and setters are by far the most common method:

And how you define relationships:

I should mention here that the Symfony convention is to use this living code comments (“annotations”) to do this definition, but that Doctrine also supports XML and YAML definitions. The core thing to note is that table columns and names are explicitly defined.

The Good: What Data Mappers Allow

The Bad: Data Mappers Are Hard

Which ORM Should I Choose?

“Which ORM is best?” was the literal question I demanded to have an answer from the world about four years ago. The thing is (as with most everything in both programming and life), that’s a silly question. Context matters. Infrasture matters. The things that seem like great choices in one world aren’t great in others.

In general, I’d perscribe active record for people who want to get up-and-running quick with a from-scratch application. And I’d prescribe data mapper where you wanted an ORM but also had to support compatibility with a strange and “legacy” database schema.

How do you feel about the Single-Responsibility Principle?

I think that the “single-resposibility principle” is often transformed into a parody of a core good idea. But that’s again an opinion too big for this article. But, it’s a topic that comes up a lot around ORMs, and for good reason.

I feel like this article from Jamie Gaskins highlights the case about the SRP and ORMs well, bringing in the whole question of how to test.

The entire reason for my writing that gem has been caused by the ActiveRecord gem’s violation of the Single Responsibility Principle. All objects and methods in a system should follow the Unix principle of “do one thing well”. Active Record (both the pattern and the gem) combine business logic and persistence logic in the same class.

An object based on the Active Record pattern represents not only the singular object but the representation in the database, as well. Additionally, methods on ActiveRecord classes are intended to operate over the entire collection of objects. This is entirely too much functionality and it should be separated.

Context Matters for ORMs, A Lot

What that means, practically, is that if you make your database at the same time you make your database-using web application, you’ll be in good shape using and active record ORM like Laravel Eloquent. Both will be in sync, because you’ll have the same ideas in mind as you did at the outset. This is the happy “green field” scenario.

But data mapper fits much better in a “brown field” or “legacy” database system. Have a DB column labelled rec, which actual is comple encoding of if a student is recommended for the next class? Just change your mapping to encode that meaning. And with Doctrine and other data-mapping systems, doing that is totally normal and obvious. (Depending on the active record implementation you use, renaming is likely to be possible, but may not be easy.)

I came to a much greater degree of clarity on this whole thing by watching a conversation Martin Fowler — who basically is the reason these patterns are known by these names — had with his colleague Badri Janakiraman about active record and its role in a “Hexagonal Rails” architecture. You might want to check it out. On that same topic, I also enjoyed an informal conversation organized by Shawn McCool and a number of other PHP developers on the topic.

In general, the question of which ORM system to use (if any) is not one with a clear set of answers. Maybe it makes sense for you to have your database as a part of how you think about your application domain: if it does, there’s not really a good reason to go all the way to a data mapper. That is specifically the case Martin and Badri talk about in their conversation, and both seem to be very satisfied with the result.

The only thing I know for sure: a dogmatic answer to the question of what ORM to use is probably not going to the best one for all possible circumstances. What matters most is that you choose how you work with the database based on what makes the most sense in your specific case, not which general answer is most popular today.

6 thoughts on “ORM Patterns: The Trade-Offs of Active Record and Data Mappers for Object-Relational Mapping”