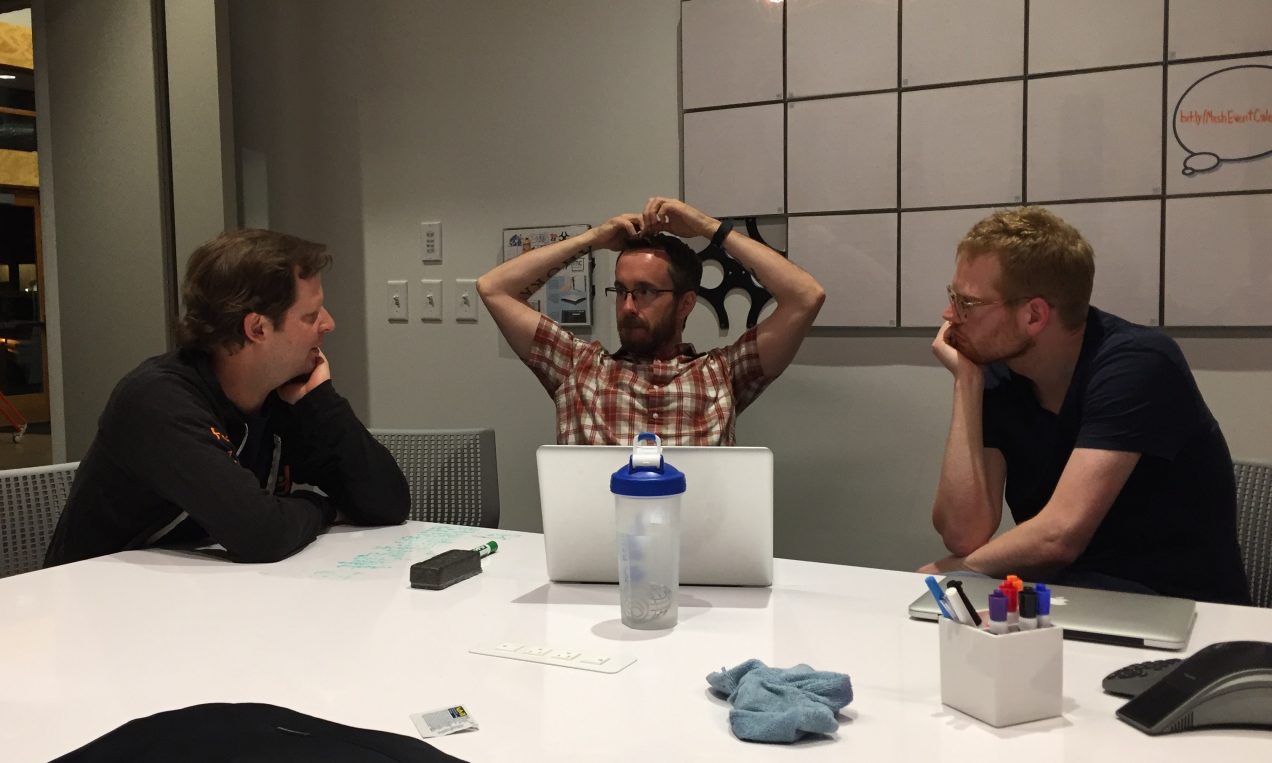 Like many people, I love the idea of doing positive work for the world. I do both little and big volunteer work, on a recurring and one-off basis. But the point here isn’t how much praise I deserve (lots 😝), but what’s it been like for me working with Code for Fort Collins. Code for Fort Collins is a member of Code for America’s brigade program, and I’ve been involved for a few years. Here I’m going to examine what I’ve learned from my involvement.

What is Code for Fort Collins?

Technically, Code for Fort Collins started about June of 2016. I’ve been involved since that August, and am now the (de-facto) captain of the brigade, alongside Dan LaRoche.

I first discovered Code for Fort Collins on Meetup. I’m a chronic joiner on there, and I’ve used Meetup to really get a good sense of the “tech scene” in Fort Collins. By “tech scene”, I mean the nexus of technical and business groups in the community.

Fort Collins is a growing city of about 160,000 people about an hour north of Denver. That’s 50 miles or 80 Euro-miles (km) for those who like distance metrics. The city has got a lot of ambition, a lot of small web shops, and some large computer software and hardware companies around. We’re a university town (Colorado State!) as well.

Code for Fort Collins was started by a few local friends who thought it seemed like it would be a good way to give back. And it has been.

As I write this, Code for Fort Collins has about 250 members on Meetup, and about 5-10 regularly-involved members. We’re loosely affiliated (as I think all brigades are) with the Code for America brigade program. We’ve completed a few projects, the most recent is a data-dashboard for Homeward 2020. We made it to aid the organization and the city come to terms with the data-problem that has stopped them from solving homelessness for too long.

Why I got Involved with Code for Fort Collins

I got involved with Code for Fort Collins for a host of reasons, which I think would be true of most people. Among them:

I think the latter two of these (and to some extent the first) is why every member of every Code for America brigade joins. If the none of these factors are why you joined, or have thought about joining, I’d love to hear yours.

What I Do for my Code for America Brigade

My role in Code for Fort Collins has changed over time. This is probably not the case for everyone involved in a Code for America brigade, but I imagine there’s a high probability it’s true for anyone involved in a smaller one for a few years (like me).

Originally, I joined Code for Fort Collins with the vision of being an “individual contributor.” What I mean by that is that I would write some code that’d be useful for the project(s) we worked on. Hopefully some would be in environments I knew well, some would be a chance for me to learn. I didn’t think that I would do project management, scheduling, fund-raising, or anything else. I’d just write some code.

The first project Code for Fort Collins did was for an organization in town called the Fort Collins Bike Co-op. They help people get bikes, rescue stranded bikes, and generally help Fort Collins be a great city (at least by American standards) for biking in. They had (and have for now) a quite-antiquated site in both look and functionality. We were planning to give them a shiny new WordPress site, and they were on board. I’ve personally done tons of WordPress development in my career, so a big part of my initial contributions was to that site.

What Made My Role in the Brigade Change

After we finished (handed off, not launched, more on that later) the Bike Co-Op site, the Code for Fort Collins volunteers did some project brainstorming. We weren’t really connected with other organizations in town doing good work, so we were largely brainstorming our problems and our needs. None of the projects we came up with really resonated with me. There are two projects we’re still working on that started in this window: Solar Scorecard, and CERP. They’re both good projects, they just didn’t excite me that much.

This lack of excitement made me do a little more brainstorming and chatting with friends who were doing good work. (I mean, non-profit and volunteer work, essentially.) I had a few really good conversations about cool project ideas that haven’t worked out, but also got connections to some that did. (Like the homelessness data dashboard I mentioned above.)

Around the same time, one of the current leaders of Code for Fort Collins had to quit, which left one (Jordan) behind. Jordan started to actively ask the rest of us volunteers for help with running the organization, and I expressed my interest. I’d warmed, over the previous few months, to the idea that brigade leadership was the way I could make the organization much more impactful and engaging for me.

What I Do Today for Code for Fort Collins

That other starting-founder (Jordan) has since stepped away. He and I were very-informally co-leading the brigade for a few months, but he had final say (in my head). He’d been leading for longer, had the connections with Code for America people, and more. But then Jordan got a job out of town (down toward Denver). Naturally, he was looking to minimize his involvement as a result.

I stepped into the gap, and was thus given the de-facto title of “leader”, “captain,” etc. Historically, Code for Fort Collins has shrugged off labels and processes, so the title has never been clear. I think lack of clarity helps with some things (no one feels excluded) but hurts with others (decision-making is slowed).

Today my focus with Code for Fort Collins is making sure that it’s a durable brigade. I want to (someday) walk away from Code for Fort Collins and not worry about it all disappearing in my absence. We have a few dedicated volunteers, but not enough. And they’re not empowered enough (nor given enough responsibility) that my disappearance wouldn’t have an impact. I’m working on changing that, but it’s a new and hard process for me.

The Struggles of the Fort Collins Code for America Brigade

One of the first and most on-going problems that Code for Fort Collins has had is managing projects. I’ve made some references to this throughout, but the site we built for the Bike Co-op site really struggled as a project because no one was really “in charge.” There was no project management, no person who made the final call, and no one to make sure the whole thing went live. As such, for months since our brigade finished the site and handed it off to them (they’re also a completely-volunteer organization) it hasn’t gone live. There are signs that that’s going to change, but for now it’s been a disappointing story.

Beyond that, we struggle with retention. Part of this is simply that it’s asking a lot for a programmer to write more code in their free time without some other strong incentive. When people are offering you money for software, why make it for free? We have seen, in the history of the group, lots of people come to a new member night and disappear just as fast. We’ve tinkered regularly with new process, procedures, and ideas to fix that, but so far we’ve yet to find something that captures everyone who walks through the door. (Which I do recognize as an unrealistic standard.)

Finally, I think keeping the organization healthy has been a struggle. Because of the informal way that our CFA Brigade has been run (and, based on scant but circumstantial evidence, all of them are) it’s hard to really assess, meter, and improve the health of the group. As I mentioned, by fleshing-out more clear and explicit roles (which would be fulfilled at-will and as life allows) I’m trying to solve this.

The Successes of Code for Fort Collins

That said, it’s not all problems. I’m super pumped about the Homeward 2020 dashboard we’ve built, and that it looks prepped to keep on growing and changing with time. I’m really happy with the recent news that the Bike Co-op is making progress on the site getting filled out with content and swapped for their old one.

What’s more, I’ve gotten tons of insight about the unexpectedly important things that make a volunteer project so different than a commercial one. I’ve worked solo, with lots of teams as an external contributor, and within some others. In all those cases, we were “working” (making money) and so things like our continued attendance and desire to work were taken for granted. You can’t really do that in a Code for America brigade like ours. People come and go, they need to make more money, etc. Those things really affect how effective you can be.

Another thing that I’d consider a success is that I’ve started to form relationships with other organizations doing good things in town, and learn how we can help them. This is a result of an on-going opportunity: knowing better what the community needs, so we can better serve it. There’s a ton of distance to go, but I really think progress is being made and the trend-lines are positive.

Where We’re Going as a Brigade

Dan and I are working right now to flesh out and clarify the vision, goals, and actions that will make Code for Fort Collins a reliable, robust brigade that we want it to be.

For me, the way to go is pretty clear: Code for Fort Collins should be doing more project development and management. It should do more projects like Homeward 2020, where a member who was looking to pad their resume is connected with a project that does just that, to the satisfaction of an external stakeholder, that member, and the whole organization. It’s not sexy to consider us an organization of project management, but that’s what we need to really support individual contributors to get the most they can out of the group. And that structure better allows for other types of involvement (design, project management, marketing, etc) than we’ve been able to accomodate in the past.

My hope is that with some hard work over the next few years we can increase awareness of our organization in the community, build some great projects, and have an organizational structure that allows the organization to survive the arrival and departure of literally dozens of people in a year without any change in quality, character, and velocity. Hey, a man can dream 🙂

More than anything else, what I’ve learned from Code for Fort Collins is some things that sound cheesy to me:

Each of those is both a flip cliche and a really important statement about what I think it’s like to work in a Code for America brigade here in the middle of 2018. It’s been challenging and fun at times being involved with Code for Fort Collins, but mostly I’m grateful for it.