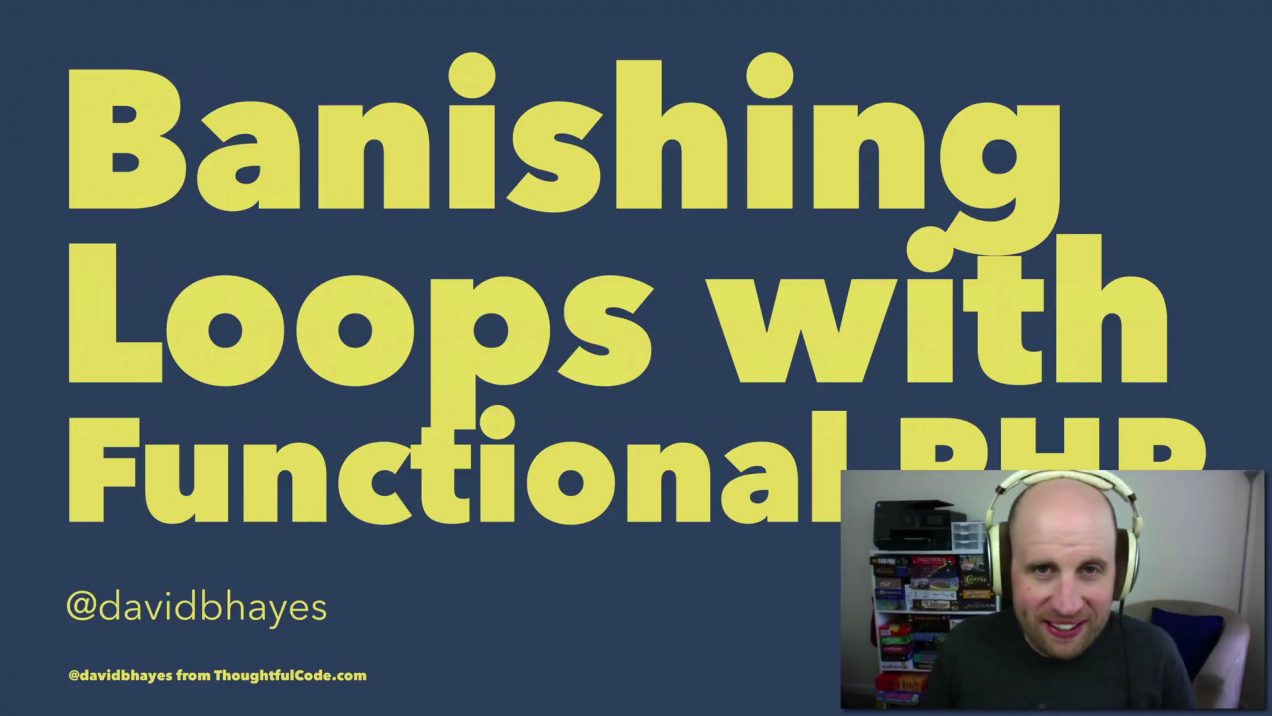 I’ve given the talk “Banishing Loops with Functional PHP” (or “Functional Programming, it just depends on how I titled it) at least three times. But it’s still, mostly a talk. You can watch a talk I’ve given many times right here:

And here are my Banish Loops with Functional PHP slides as a PDF:

If you prefer words, you’ll find a number of them below. Because of the time it took to record and edit this “functional programming in PHP” video, I’m a little more brief than normal below.

I think really understanding the benefits and value of writing functional-style PHP begins with understanding what I see as the three major paradigms of modern (logic or traditional) programming. (I make that clarification because “declarative programming” in things like CSS and more esoteric languages is quite different.)

These three can cohabitate within the same code base, and I’d say it’s rare that you see any PHP (or JavaScript, Python, etc) code that doesn’t in some way resemble or contain at least two of these paradigms. People often lose sight of how well these interact.

“Procedural” or “imperative” programming has a bit of an unearned bad reputation. This comes mostly from the fact that it’s the first and most-accessible way of writing code when you’re learning almost any language. It requires a good understanding of logic, but not need for any higher-level concepts than that. It how I wrote my first programs, and I’d guess that that is true for you as well.

In procedural code, each line gives the programming language (or computer, depending how you think) a specific directive. Define this variable, increment this variable, remake this variable, loop through this set, compare these values. These are common directions in all programs, the things that makes come “imperative” or “procedural” to me is that you don’t get much more abstract than these expression.

If you have “functions” in procedural code (which is quite common) they’re there as stored procedures. What I mean is that they’re sets of transformations or operations that you’re looking to be able to repeat. These operation can do anything: make files, delete files, read database values, write database values, or any combination and permutation of the above.

When I look around a room, my eyes see colors and sizes. I see a silver half-circle before me. That connects to a narrow silver tube. Which connects to a different silver circle. I’m describing a desk lamp, and if that description confused you, we’re getting at the value of thinking in “objects” vs procedures. We see the whole world as “object” or “aggregates.”

Object-oriented programming gets complicated because we’re very familiar with physical objects, but ideas are softer. It’s hard to know if an “EmailNotifier” object makes sense in your system, or is well designed, because you’ve rarely seen. Others, whole books don’t even resolve these problems of OOP, so this article certainly won’t. So we’ll keep going…

Similar to the way that object-oriented programming comes from the way that we understand objects, functional programming arises from mathematics and the functions we see there. (For example, y = x2.) In this way, we ignore the understanding and use of the word “function” that we have in procedural or object-oriented code. Here when we say “functions” then, we’ll often clarify that we mean “pure-functions” in the mathematical sense.

A function in a program is considered pure if it has certain properties. Most notably:

If you’re thinking “pure functions” sound pretty useless, you’re right. That’s a good and important critique. That’s a problem that goes to the heart of why functional programming isn’t a runaway success. But for us, we can skip that worry, you’ll just have to trust me.

Why Functional PHP is Helpful

Obviously, some familiarity with the names of functions in the system, and the format of function declaration, is necessary. But if you get that, most functions are pretty similar to y = x2 in their clarity and simplicity.

At this point, I ran out of energy. So use the little slide-in widget at right to signal to my your interest in the rest of this post. If enough people express, I’ll plan to finish the full text soon. It’s just more effort than I anticipated.

Here’s what the video covers that the article doesn’t currently: